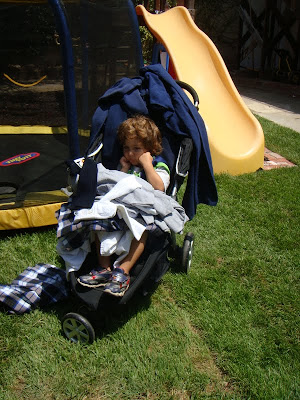 The end of the summer and the beginning of the school year usually collide with a resounding crash. But this year, school starts so early that it is more like a Titanic-sized explosion. 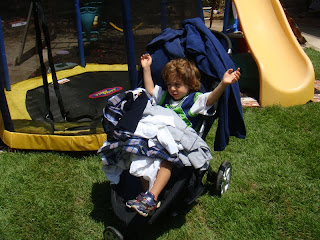 It's enough to make StrollerPrince 2.0 throw up his hands in dismay! 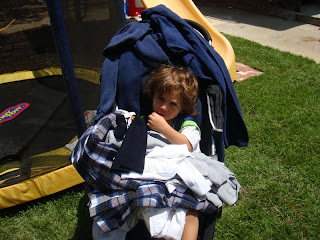 But at least, we got the uniform shopping out of the way, with a big helping hand from the new Britax B-Agile! 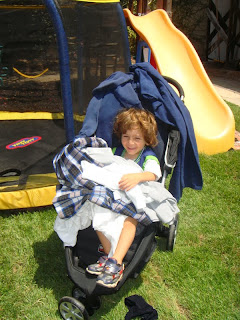 It's been said that imitation is the sincerest form of flattery. If that is the case, then Britax is paying Baby Jogger a huge compliment, because they sure look similar. 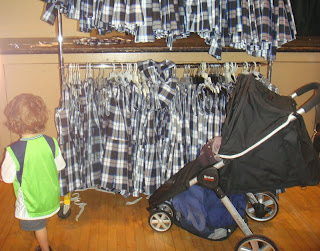 They might have figured, "Why re-invent the wheel? Or maybe "If you can't beat 'em, join 'em?" 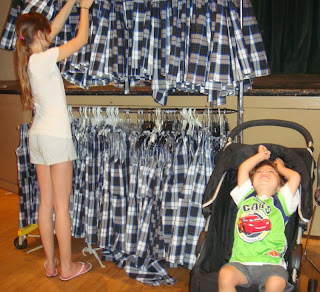 Because in all fairness, it would be very hard to beat the popularity of the City Mini. ( See my prior review of the Baby Jogger City Mini. ) SO popular, that for a long time, the supply exceeded the demand. We should all have these problems! 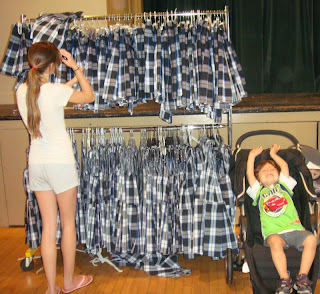 But if I had to guess, I would say Britax believes they were "building a better mousetrap" with their new B-Agile. Although at first glance they look identical, they are not. The B-Agile is smaller all around. Narrower, shorter, smaller wheels, and a pound less. 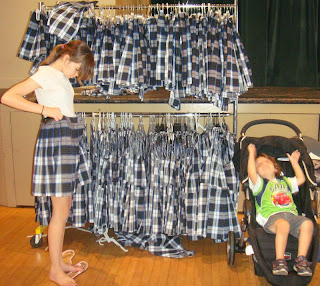 The seat is actually larger, though, if you compare the dimensions. 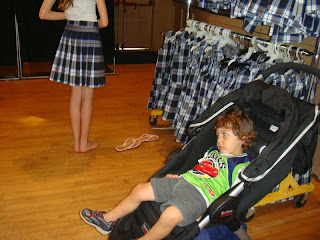 Both the Agile and Mini have suspension on the wheels. The foam tires, however, should not be considered a substitute for air tires. 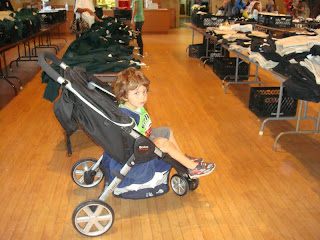 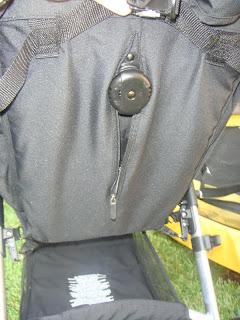 The fabric is a little softer, and more cotton-y. Preliminary reports from our Citizens of Strollerland indicate it is not as easy to clean as the slicker, shinier fabric of the Mini. We decided this problem could be solved by the addition of a stroller liner. 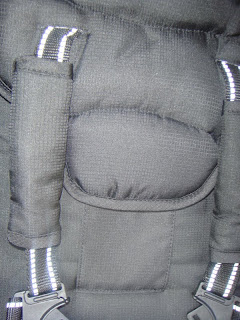 Also, our Citizens have complained of the colors. Not as snazzy as the Mini's selections. Right now, the Agile only comes in red, or black. 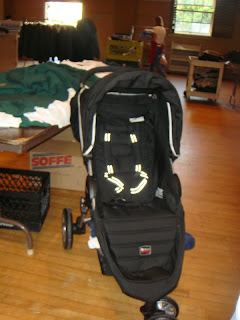 The big requests are for the stunning emerald green, like on the Nimble (see prior reviews), or the funky Cowmooflage. But I think the reflective trim makes for a nice contrast on the black fabric. 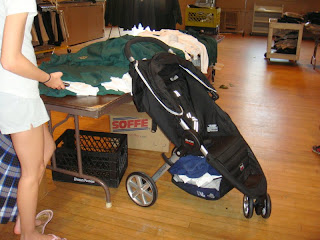 By the way, all of the uniforms you saw on the lap of SP 2.0 were stuffed into the Agile's basket! 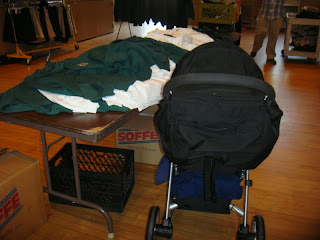 So it holds a lot, and is easy to access. 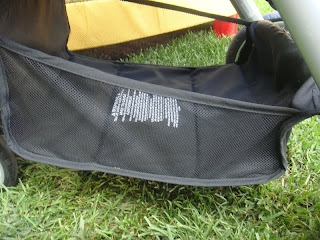 There is also an arched rear axle. That helps people with long strides from kicking the back.  Also, you can see the brake pedal on the lower right. Very easy to engage, or disengage. 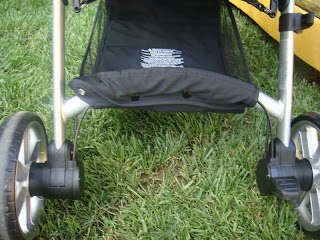 The backs of the Mini and Agile are similar. Both allow you to roll up the fabric and expose the mesh back; wonder for hot days. 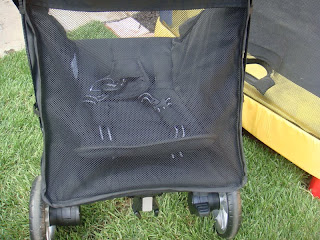 Reclines are similar, and done with a pull and drawstrings. 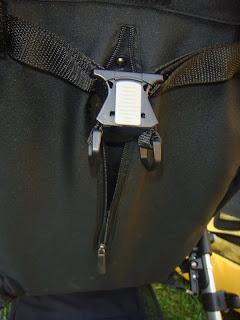 The canopy is a little smaller, with only one peek-a-boo window, instead of the Mini's two. 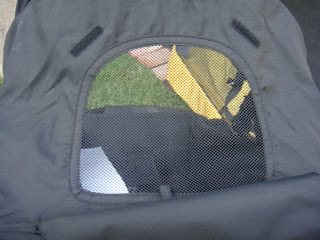 The Mini also has a mesh pocket on the back, while the Agile has a large, fabric zippered pocket. 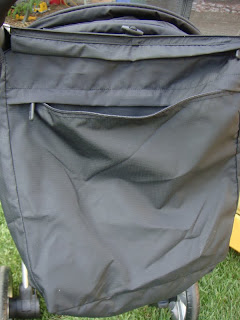 The handlebar has a soft, squishy foam, vs. the hard rubber of the Mini's. 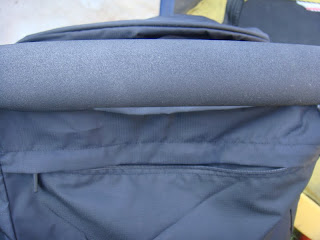 The fold is quite similar, in that you yank up the center strap in the seat. But you also push in the safety button on the side. 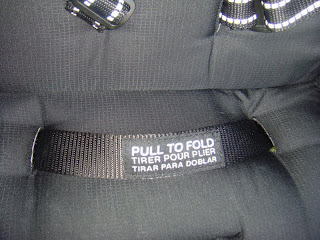 The Agile has an automatic lock to keep it closed when folded. 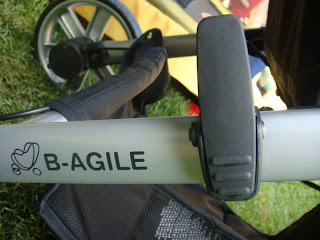 And, it even stands folded! 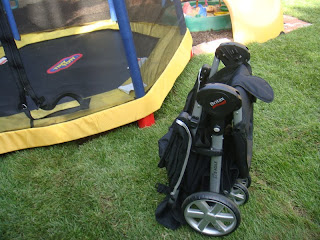 Like the Mini, you can get an optional rain cover,  mosquito net, cup holder, travel bag, and a snack tray that clicks right into the Agile. 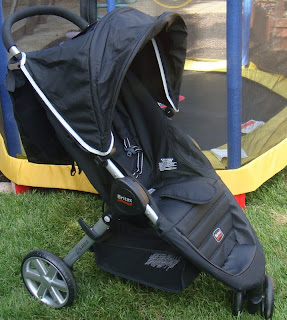 Hopefully, these comparisons will help you to decide which one will work better for you. But they are both nice, so I'm sure you'll be happy with whatever you choose!